As single-family home construction continues to rise with an almost 18 percent increase last year, the trend in homebuilding appears to be bigger homes – two-story more often than not – with more bedrooms, more bathrooms and larger garages. 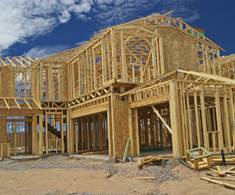 Of the 569,000-plus single-family homes built in the United States last year, nearly 54 percent were two-story. One-third of them had three bathrooms or more, and 44 percent had four bedrooms or more, according to the Annual 2013 Characteristics of New Housing report by the U.S. Census Bureau, based on building permits from 900 markets around the nation.

The homebuilding trends are interesting – some aspects have changed dramatically, while a few have stayed pretty much the same.

Overall, the number of single-family homes built annually in the United States has increased by more than 27 percent since the lowest level in decades was recorded in 2011 when approximately 447,000 new homes were built. The highest number of homes constructed in a year took place in 2006, when 1.65 million new homes were built.