A majority of patients would like to be able to substitute “telehealth” communication for in-office visits – at least some of the time, according to a new Harris Poll study. 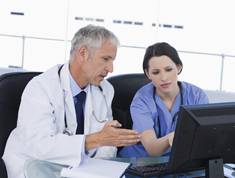 If available, nearly two-thirds of consumers say they would like to replace in-office visits with a visit via computer, in particular for follow-up visits and lower-level health issues such as colds and sinus problems. The study of 2,033 adults was conducted online by the Harris Poll for eClinicalWorks.

Patients with children under age 18 were considerably more likely to say they would be interested in telehealth visits.

Among doctors who have a patient portal available, 61 percent said they would recommend telehealth visits at least sometimes. Nearly 3,000 healthcare workers, including 584 physicians, were surveyed.

Three in five patients also said they would schedule appointments with their doctors via a patient portal or other secure website if it was available.

Approximately 40 percent of the doctors responding had a portal in their office, through their electronic healthcare system or practice management system, at the end of 2013, according to a study by Frost and Sullivan.

The majority of the doctors said a top benefit of sharing data with patients through secure patient engagement tools was allowing patients to access their medical health records for their own review or to easily share with other doctors.

Most doctors use their portals, the Frost and Sullivan study said, to:

Of physicians who actively use a patient portal to communicate with their patients, 67 percent have noticed a change in conversation with patients since portals, health apps and wearable devices have become available.

Replacing in-office visits with electronic communication can save more than 50 percent of costs, a recent study by Alliance for Connected Care found.

Average cost per telehealth visit was found to be between $40 and $50, compared to the typical $136 to $176 spent on an in-person visit, according the study, which collected information from commercial telehealth vendors and compared it to costs incurred by Medicare and private insurers.

One electronic visit was enough to resolve the health issue – usually a low-level complaint like a cold, sore throat or sinusitis – in 83 percent of the cases, the study found.