In a unanimous decision, the U.S. Supreme Court has held that an inherited IRA does not qualify for the bankruptcy exemption generally available for retirement savings. 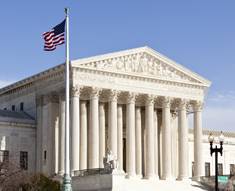 In other words, inherited IRAs are not protected from creditors in bankruptcy. (Clark v. Rameker, Sup. Ct. June 12, 2014)

Brandon and Heidi Clark filed a bankruptcy petition in 2010. The Clarks sought to exempt, under Bankruptcy Code Section 522(b)(3)(C), the monies in an IRA that Mrs. Clark had inherited from her deceased mother nine years earlier.

The bankruptcy court agreed with the bankruptcy trustee and the Clarks’ unsecured creditors that the amount in an inherited IRA is not “retirement funds” within the meaning of the Bankruptcy Code. That decision was reversed by a federal district court but reinstated by the Court of Appeals for the Seventh Circuit.

The Seventh Circuit’s decision was at odds with an earlier holding by the Fifth Circuit (In re Chilton, CA 5, March 12, 2012), so the Supreme Court agreed to hear the case to resolve the split among the circuit courts.

The Supreme Court began its analysis by noting that the Bankruptcy Code does not define “retirement funds.” The court stated that the determination of whether funds held in an account are “retirement funds” should be based on the legal characteristics of the account holding the funds and on whether the account is one that was set aside for use when an individual is no longer working.

The court said there were three characteristics of inherited IRAs that made funds held in these accounts “not objectively set aside for the purpose of retirement”:

1. Holders of inherited IRAs are prevented from putting additional funds into the account. They cannot use the account to save for their own retirement.

2. Holders of inherited IRAs must withdraw money from the account without regard to the number of years until retirement. The account could be depleted before the holder reaches retirement.

3. Inherited IRA owners may make penalty-free withdrawals from the account at any time, up to the entire balance of the account, without triggering the 10 percent early withdrawal penalty. The funds can be used for current consumption.

Since nothing prevents the holder of an inherited IRA from using the entire balance immediately after bankruptcy for purposes of current consumption, if the bankruptcy exemption applied to inherited IRAs, it would turn the Bankruptcy Code’s “fresh start,” into a “free pass,” the court said.

It isn’t clear whether the conclusions in the Clark case will be extended beyond the specific facts presented to the court. For example, could creditors reach the assets in an inherited IRA if the named beneficiary were a trust rather than the individual who later declared bankruptcy? A spousal beneficiary of a decedent’s IRA has the option of treating the IRA as his or her own, rather than being subject to the general rules for “inherited IRAs.”

When the election is made, the surviving beneficiary spouse, as the IRA owner, may defer the start of lifetime IRA distributions to his or her required beginning date. The Clark decision does not address this fact pattern and it is not clear how the court would have ruled if faced with these facts.