Tax evasion: Is there a statute of limitations on evidence?

When it comes to relevant evidence in an income tax evasion case, is there a statute of limitations? 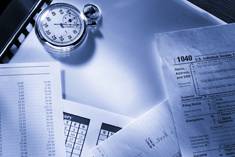 Chet Lee West found out the hard way that there isn’t. You cannot suppress evidence, claiming it was barred under the six-year statute of limitations, when charged with income tax evasion, the court found in the case of United States vs. Chet Lee West (U.S. District Court, Nebraska, 2014-2 U.S.T.C., Paragraph 50,486, Oct. 2, 2014).

West was trying to invoke Internal Revenue Code Section 6531, which outlines the periods of limitations on criminal prosecutions. But that section doesn’t apply because it is a procedural limitation designed to bar stale claims and charges. It doesn’t affect the introduction of relevant evidence.

On July 17, 2013, the grand jury for the district of Nebraska returned an indictment against West charging him with three counts of income tax evasion. The deadline to file pretrial motions was Jan. 31, 2014. On Aug. 18, 2014, West filed a pretrial motion to suppress. He was trying to suppress any evidence that occurred before Dec. 31, 2006. Any evidence that occurred before this time period would lie outside of the statute of limitations.

The court responded by stating that West’s motion was untimely and lacked merit.

The court could have denied West’s motion because it was not filed by the deadline. But it decided to proceed with the case and decide it on its merits.

What determines whether the evidence is admissible is its relevance, not the date of the evidence. Evidence that is relevant is admissible unless it is prohibited by the Supreme Court, United States Constitution, federal statute or the federal rules of evidence. None of these prohibitions applied in this case.

Therefore, the judge determined that Code Section 6531 did not apply and denied West’s motion to suppress the evidence.