Jane is the administrative assistant at a local company. She considers herself to be an honest person. She would never think of walking into a store and shoplifting. That would be wrong. 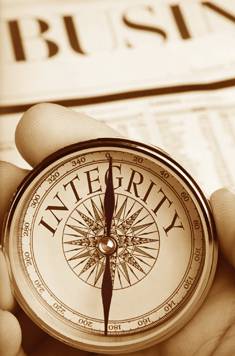 Yet, twice this week, Jane walked into the company mailroom and applied postage to her personal bills without a second thought.

How could she do that?

Because she had seen her boss do the same thing – many times. Once Jane saw this, she assumed postage was a perk offered by the company. She’d never known of other companies where this was permissible, but, oh well.

Tom works in the warehouse of a manufacturing company. The local vice president, Jerry, sent Tom to his house to move some furniture for his wife. Jerry said, “Don’t worry about it – I’ll approve the overtime.”

Jerry’s the boss, so Tom did as he was told. A few weeks later, Tom needed a truck to move his daughter into her college dorm. He borrowed the company truck. He was only going to use it for a few hours, after all. No one would ever miss it.

Stories like these happen every day in companies, although there may be policies in the employee handbook disallowing them. The employees probably even signed the handbook, saying they understood the policy and would abide by it.

Whatever the company policy, the behavior by the people at the top becomes the standard. If a company is serious about maintaining an ethical, honest work environment, training is a first step. And the training has to start at the top.

A poor tone at the top was cited as a primary factor in 18 percent of employment crimes with a loss of $1 million or more, according to the most recent biannual report of the Association of Certified Fraud Examiners.

Ethics is not a clear-cut issue but is often in the eye of the beholder. What one person sees as unethical may be perfectly acceptable to someone else.

Doing so might help people like Jane, Tom and their bosses make better decisions about their actions.

Once employees are trained on the company’s ethics policy, they need to know what to do if they observe unethical behavior. Employees are much more likely to witness these occurrences than you are. The general wisdom is that an anonymous “hotline” is the best way to allow employees to report questionable behavior.

Without anonymity, employees may fear retaliation from the person or persons being named. If a hotline isn’t available, there should be a clear path for an employee to follow – one that does not have to include direct reporting through a supervisor.

When questionable behavior is reported, it must be investigated, and the upper echelons of management must be swift, thorough and diligent. There can be no “sacred cows” who receive special treatment. If upper management is involved in the ethics breach, an independent party may need to be brought in to investigate to remove any appearance of impropriety.

Consequences should fit the crime. If your company policy indicates that certain offenses will result in termination, it should be enforced. Other issues might result in a written warning as a step in a three-strike policy. Part of your staff training should include training on the consequences to be expected.

Another important feature of your company’s ethics and compliance program involves internal controls. Your systems and processes should be designed to minimize the chance that someone could behave unethically without being caught.

Many research studies have shown that otherwise honest employees will take liberties if they find themselves in a desperate situation. Employees generally plan to take only a little – and only for a short time. They always say they had planned to pay it back. If you make it easy for them to steal, you’ll see it happen.

Having appropriate internal controls and checks and balances protects your employees from their own desperation. Don’t allow shortcuts to procedures. Management should review the separation of duties and approval/sign-off processes to ensure that checks and balances are in place and working as they were designed to work.

Be clear and emphatic with the message that your company values ethical behavior and that unethical behavior will not be tolerated, at any level. Don’t rely on trust. Rely on a well-designed system.