Shoplifting is the major cause of retail shrinkage in most countries in the world. 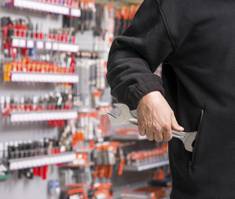 But in the United States, employee theft outranks shoplifting as the No. 1 way retailers see their inventory shrink, according to the latest Global Retail Theft Barometer.

The United States leads the world in employee theft at retail establishments, with $18 billion in merchandise pilfered by employees each year. That’s nearly 43 percent of total U.S. retail shrinkage – $42 billion. About 37 percent of U.S. shrinkage is lost to shoplifting.

The biggest losses came at U.S. discount stores, where nearly 3 percent of revenue was lost to shrinkage. That was followed closely by drug stores and pharmacies (2.2 percent) and supermarkets (1.4 percent).

Part of the reason those stores had more losses was because they spent less on crime prevention, the study said, as well as “the prevalence of organized retail crime.”

The types of products targeted most be shoplifters and dishonest employees were smaller products that were easier to conceal, such as makeup, mobile phone accessories and fashion accessories. Power tools, wine and liquor are also popular targets.

The study was underwritten by Checkpoint Systems, Inc., security products and conducted by The Smart Cube research company and Ernie Deyle, a retail loss prevention analyst. The study included 222 retailers in 24 countries with $744 billion in sales.

The cost of shrinkage worldwide breaks down to about 1.29 percent of retail sales, on average. In the United States, the cost is about 1.48 percent. The cost to honest consumers in America is about $403 per household.

Increased focus on loss prevention in recent years has brought shrinkage down in most countries. But, in the United States, it is about the same. Norway and Japan recorded the lowest rates of shrinkage, less than 1 percent, while Mexico and China had the highest, just slightly more than the United States.

Applying security tags or labels – called source tagging – has helped to reduce shrinkage and is continuing to grow. Half of the U.S. retailers in the study plan to increase usage of the tags.

Other methods to help reduce losses include focusing on loss by all areas of the company – including marketing, finance, operations and logistics. Then, information should be studied to better understand where losses are happening.

Having products on open display under the watchful eye of well-placed security cameras and designing store layouts to minimize theft also have a big impact on reducing shrinkage.

Employee training is crucial to make people aware both internally and externally of what retailers do to avoid losses.

Other ways to reduce employee theft start in the hiring process with background and reference checks. Often, retailers don’t spend as much time on this step as other businesses do.

Using a computerized inventory tracking system also gives a better idea of how inventory is moving from your shelves. Monitor sales slips and compare employee sales and “no sales” register openings.

One of the strongest deterrents to employee theft is to encourage anonymous tips from other employees. If workers know they may be reported by other employees, they are less likely to take the chance.