The size of gifts and the average amount of gifts donated online continue to grow, though online giving still represents only a small percentage of overall giving.

At least six organizations last year had an online donation in excess of $100,000, according to a Chronicle of Philanthropy study of the 400 largest nonprofits, including:

In overall annual online gifts, the Leukemia & Lymphoma Society topped the list of the 400 nonprofits surveyed by the Chronicle of Philanthropy at $98 million in online gifts in 2013. 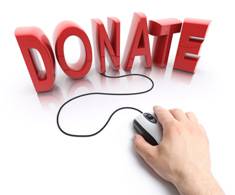 Online gifts today account for just 6 percent of all giving, according to the Blackbaud Index, but online giving is increasing faster than all other kinds of giving. Online giving in 2013 increased nearly 14 percent compared to about a 5 percent increase overall.

The average online gift in 2013 grew to $68, according to the 2014 Benchmark Study by M+R and NTEN. And monthly giving, which accounts for a significant amount of online revenues, increased by 25 percent.

As more and more organizations have jumped on the online bandwagon, email messages sent to potential donors, not surprisingly, have had a decrease in open rates. Open rates of fundraising emails were down 11 percent and advocacy emails, 25 percent, in the benchmark study.

A lot of emails are being sent out to bring in a minimal return. For every 1,000 messages sent out, organizations receive an average of $17 in return.

Interestingly, the response rates to advocacy emails from environmental groups were more than two times higher than other types of nonprofits in the M+R and NTEN study.

While website traffic grew substantially in 2013, the fastest growth came in social media. The followers of Facebook sites of nonprofit organizations grew 37 percent, and Twitter site visits were up even more – 46 percent.