Hotel occupancy is on the rise across the nation as post-recession leisure and business travelers are hitting the road again in high numbers. 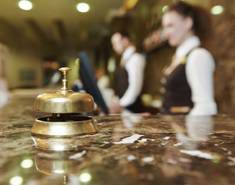 Travelers are paying a little more for their lodging as average daily room rates have increased to the highest levels since 2009.

Hotel construction, however, has been slow, with the exception of some premier select properties in suburban and airport locations, according to research by the PKF-HR consulting firm in a new report by the National Board of Realtors.

Manhattan is an exception with a large number of new hotel projects underway.

Travelers are paying a little more for their lodging as average daily room rates have increased to the highest levels since 2009, according to the study.

Occupancy rates rose to over 64 percent in 2014, two points higher than the long-term average of 62 percent. Lodging demand is expected to increase in 2015.

The average daily room rate has grown to approximately $115 a day, with rates expected to continue increasing about 5 percent per year on average. But hotel prices still remain about 25 percent below the previous high before the recession.