How to run a meeting on a controversial subject

An issue is brewing, opinions are being formed and camps are being organized. Arguments for and against are being developed. Everyone is ready for a fight. 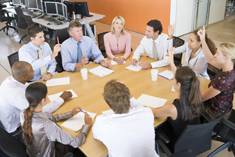 You know you need to get the issue on the table and resolved, but you dread the meeting.

How can you keep the meeting from getting out of hand and come to a resolution everyone can live with?

1. Understand the essence of controversy

As long as you deal with people, you’re going to have varying opinions. All attending feel their opinions are justified, well-thought-out and true. As stated in the book, Getting to Yes, you must assume the positive intent of every person in the discussion. As the leader, you must help each person in the group grasp this concept as well. While there are different opinions, the goal must be in sync. If everyone is after the same ultimate goal, issues can be worked through.

2. Set the stage for the meeting

The meeting must be carefully planned. The goal must be clear to all, and the ground rules understood. An agenda should be developed and distributed to let everyone know how the meeting will run. The goal of the meeting should be clearly stated, along with the message that everyone is intent on reaching the goal for the good of the group. Ground rules will reflect that. They may include statements like, “We will respect each person’s right to speak without interruption,” “We will maintain a tone of respect at all times,” “We will hear all perspectives before debating any.”

3. Engage a strong and fair facilitator

If you feel that you will not be able to be fair and strong, bring in a professional. The facilitator’s role is not to make the decision or to debate the issue. It is to lead the discussion and keep everyone on track. This is especially critical in controversy. Emotions run high in these situations. An objective, disinterested third party may be able to manage the interactions better than an insider.

4. Begin with areas of agreement

Review these at the beginning of the meeting and write them down where everyone can see them. For instance, if you’re discussing moving to a new location, these areas might include: We want to be accessible to our clients; we want to be conscious of the impact on employees; we want to manage our cost structure and stay within our budget of $20 a square foot. Whatever the areas of agreement, starting with some common ground can help keep everyone focused.

If possible, use industry benchmarks, client survey results or financial parameters to keep the discussion on track. There may still be many ways to approach the decision, but some suggestions will fall by the wayside because they can’t meet these predetermined criteria. That doesn’t make them bad suggestions. They simply aren’t a fit to the decision set. Allow every person to maintain their dignity. The purpose of the meeting should not be to tear anyone down. Don’t let it become personal.

When discussing controversial issues, emotions can run high, despite best efforts to remain calm. If you or the facilitator feels that a break is needed, take it. A little cooling off time might help you avoid a real breakdown in communication.

7. Once a decision has been reached, encourage the team to stand behind it.

They each had their say, their points were considered and a conclusion was reached. Ask them to support the decision once they leave the room. If you’ve handled the meeting well, they’ll be more likely to do so.