Inherit an IRA from your spouse? The rules

Most husbands and wives name their spouse as the primary beneficiary of their IRA.

But what does a surviving spouse need to consider as the beneficiary? 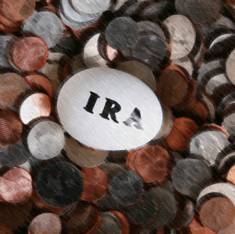 The surviving spouse may take one of two options.

In either case, the surviving spouse is treated as if he or she had funded the IRA.

Making the spousal election or rollover has three major advantages:

Thus, a surviving spouse who is younger than the decedent can defer the start of the payout period by making the rollover or electing to treat the decedent’s IRA as the spouse’s own IRA.

2. Distribution period may be extended. Normally, a beneficiary’s required minimum distribution is based on that beneficiary’s single life expectancy. With a spousal rollover or an election, the IRA is treated as if the surviving spouse had funded it. In that case, the spouse can take the required minimum distribution using the favorable Uniform Lifetime Table, which is based on the joint life expectancy of the spouse and a hypothetical 10-years-younger beneficiary. Note that a separate lifetime distribution table applies if the spouse was more than 10 years younger than the IRA owner.

There is a potential tax issue for surviving spouses who are under age 59 1/2. Once the spouse elects to roll over the decedent’s IRA into the spouse’s own IRA, withdrawals made from that IRA before age 59 1/2 generally will be subject to the 10 percent early distribution penalty tax on top of regular income taxes – unless an exception applies.

To avoid this problem, the surviving spouse could keep the entire IRA balance in the decedent’s name until the spouse reaches age 59 1/2. Any withdrawals before that age will be penalty-tax-free. The regulations provide that a surviving spouse-beneficiary’s election can be made “any time after the individual’s date of death.”