Is your office being reviewed for its wait time?

Doctors’ offices may be going the way of restaurants and hotels when it comes to consumer reviews. 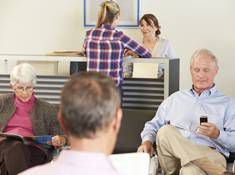 Patients are turning more often to Yelp and other online sites to compare doctors – and office wait times are a big part of the comparison, according to a recent study.

Only 3 percent of the 5,000-plus people surveyed say they are not frustrated by wait times at their doctors’ offices – even though nearly half say they typically wait less than 15 minutes to see their doctor.

What are potential remedies to soothe impatient patients? The study found:

Giving patients estimated wait times and having the doctor apologize for the delay are fairly easy fixes and can go a long way toward easing patient frustration.

Three other means that respondents said would make the wait more bearable included:

Patients are pretty well split on whether they would rather wait in the lobby or a private room – about one third each and another third that doesn’t care.

But women have a stronger preference for waiting in a private exam – nearly 40 percent said that was their preference, the study found.

The survey also asked if patients would be willing to pay a small additional fee to be seen faster by their doctor. Only 22 percent said they might be open to paying a small added fee.

Of course, to keep on the good side of Yelp, the best solution is to improve office efficiency and stay on schedule. But when that’s not possible, letting your patients know approximately how long their wait will be, as well as having the doctor give a few words of apology, should keep most of the negative reviews at bay.