Make eye contact - and don't bring your dog to the interview

One job candidate sat in a yoga pose throughout the interview. 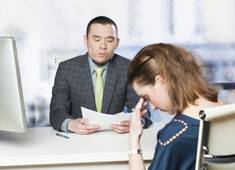 Another attempted to hide his dog in a duffel bag on his lap.

And a third tried to Google the answer to a question.

These are just a few of the most outlandish interview behaviors that, obviously, cost the applicants the job, as reported by nearly 2,200 hiring and human resource managers in a recent survey by the Harris Poll on behalf of Careerbuilder.

Half of the employers said they knew within five minutes if the applicant was a fit for the job. That amount rose to 90 percent after 15 minutes.

And it’s not just the answers to the questions applicants are being asked. Body language sends many clues to interviewers. Non-verbal behavior reflects a level of professionalism, experts say.

The biggest body language mistakes, according to the survey:

3. Playing with something on the table (33 percent)

5. Fidgeting too much in their seat (29 percent)

6. Crossing their arms over their chest (26 percent)

7. Playing with their hair or touching their face (25 percent)

9. Using too many hand gestures (11 percent)

10. Having a handshake that is too strong (7 percent)

Careerbuilder recommends that job applicants practice interviewing skills ahead of time and even video themselves during a mock interview situation to help identify problem areas.

It’s important to do background research on the company beforehand and also to have a 30-second “elevator pitch” ready to answer the “Tell me about yourself” question.

Then, before the interview, the advice is to remember to breathe and take a few deep breaths to relieve some of the anxiety.

And, here are some other unlikely scenarios to avoid that have actually happened to job interviewers in the study: