Employees are most engaged and perform best on the job when their managers focus on their strengths rather than their weaknesses, new research by Gallup has found. 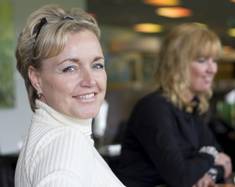 Those employees who are encouraged to use their talents and strengths in their job produce more work and significantly better work. They are also more than twice as likely as other employees to be engaged in their job.

Engaged employees are those who are involved in, enthusiastic about and committed to their work and workplace. After years of study on the topic, Gallup has found that fewer than one-third of American workers are engaged in their jobs. The other two-thirds are indifferent, “sleepwalking through their workday without regard for their performance or their organization’s performance.”

The most powerful benefit a manager can give employees, the report said, “is to place them in jobs that allow them to use the best of their natural talents, adding skills and knowledge to develop and apply their strengths.”

So it’s not a surprise to learn that the primary culprit when it comes to a lack of employee engagement is poor management. A study of more than 7,000 employees found that half of them had left a job at some point in their lives to get away from a manager.

Consistent, open communication between manager and employee is one of the primary keys to employee engagement, the Gallup studies found. Engagement is highest with employees who have daily communication with their managers – whether it is face to face, over the phone or by email or text. Employees whose managers hold regular meetings with them are almost three times as likely to be engaged as those who don’t hold regular meetings.

It is important that the communication be about more than what is happening in the workplace, the study found. Employees want to feel their managers are invested in them as people and are interested in their lives outside the office.

The best managers, the study said, are those that build genuine relationships with their employees and understand that each person is different.

“A productive workplace is one in which people feel safe – safe enough to experiment, to challenge, to share information and to support one another,” the Gallup report said. “In this type of workplace, team members are prepared to give the manager and their organization the benefit of the doubt. None of this can happen if the employees do not feel cared about.”

Knowing what is expected of them by management is another key for employee engagement. Employees need more than a written job description to fully understand their role, the study said.

“Great managers don’t just tell employees what’s expected of them and leave it at that. Instead, they frequently talk with employees about their responsibilities and progress. They don’t save those critical conversations for once-a-year performance reviews,“ the report said.

The problem, says Gallup, is that only a small percentage of people are really cut out to be managers. Their research shows that only one in 10 people possess the talent to be good managers, and companies choose the wrong people 82 percent of the time.

From years of study of managers in every occupation from military personnel to teachers to trucking, Gallup found the following five talents are essential to being a good manager:

While many people have some of these talents, few have all. Gallup has found that managers possessing these qualities have lower turnover and unscheduled absences, as well as bring higher productivity and profitability to the organization.