Manufacturing: Its broad impact on the economy

Diversity in business sectors in an economy brings stability and opportunity. Not all sectors are created equal, however. The manufacturing sector, in particular, provides many direct and indirect benefits, not only to local areas but to the country as a whole. 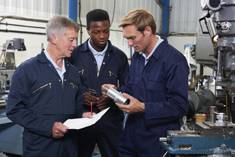 The United States is rich in natural resources, ingenuity and a motivated work force. All three combine to create one of the strongest manufacturing economies in the world.

In fact, looking at the $2 trillion in output produced by American manufacturing, the sector alone ranks as the world’s 10th largest economy.

Despite the loss of manufacturing jobs during the past several decades and the recent recession, sector employment is rising again. Many believe there is an on-shoring trend of jobs moving back to this country. Wage gains overseas, lower utility costs here and high worker productivity are leading some major manufacturers to shift production back to this country.

In fact, the Boston Consulting Group believes that we are reaching the so-called tipping point for certain industries, meaning it will soon be more economical to produce goods domestically than abroad. This is good news for everyone.

The most recent data from the Bureau of Labor Statistics reports that manufacturing jobs are at the highest point since 2010. In April 2015, sector employment was 12.3 million as compared to 11.4 million in April 2010, the bottoming out regarding manufacturing jobs.

In 2005, sector jobs clocked in at 14.2 million, so more gains are needed to reach former levels. The top four industries by employment are food and beverages, fabricated metal products, machinery, and computers and electronic products. These industries, with the exception of food and beverage, are among the so-called tipping-point industries.

Manufacturing jobs paid an average of $25.11 in April 2015; nonsupervisory employees were paid $19.80. Although some other sectors report slightly higher wages (construction or business services), others like hospitality and leisure are much lower. Total manufacturing payroll was over $700 billion per quarter in 2014, representing 12 percent of private sector payroll.

Manufacturing payroll directly results in workers purchasing goods and services, buying houses and contributing to the tax base. Beyond that direct benefit, manufacturing supports jobs in other sectors. Production creates demand – for raw materials, transportation, other manufactured goods, packaging, business services and maintenance. Whole cities have sprung up around a single company or group of companies, another reason why the shift of certain production overseas has been so devastating.

Based on U.S. Bureau of Economic Analysis data, the Manufacturing Institute reports that in 2014, production company activity directly resulted in 5.4 million jobs in other sectors. This means that the sector is responsible for a total employment of more than 17 million people.

These jobs include 514,000 in mining, 570,000 in agriculture, and 544,000 in transportation and warehousing. Professional and business services report the largest impact, with 1.5 million jobs supported by manufacturers. This boosts manufacturing impact on jobs by 50 percent.

In addition to jobs, calculating the multiplier effect of economic activity is a useful tool to gauge the impact of industries. Economists and analysts use this tool to help communities and states understand the potential outcome of public and private investments.

The Bureau of Economic Analysis prepares comprehensive industry tables to define each sector’s contribution to gross national product. The input-output benchmark demonstrates how sectors interact and how activity in one influences another.

The next highest sector was agriculture, forestry, fishing and hunting, with an output of $1.11 per dollar spent. Agriculture was another core industry in the development of our country, and shifts in croplands – from New England to the Midwest, for example – demonstrate the devastation left when production moves away.

Job and output data plainly demonstrate the importance of manufacturing industries to a balanced and thriving economy. Other benefits include high-quality jobs requiring an educated work force and a productive use of natural resources.