Most shoplifting an impulse decision: Tips to prevent it

More than $35 million in merchandise is stolen every day in the United States by shoplifters. 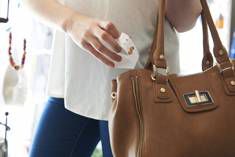 And shoplifters get away with it 48 times for every one time they’re caught.

Who are these shoplifters – and why do they steal?

It might surprise you to learn that only 3 percent of shoplifters are “professionals” who treat stealing as a business. Some are members of international shoplifting gangs, others steal to resell at bargain prices and some to support their drug habits. This 3 percent steals 10 percent of the $13 billion in merchandise stolen each year.

But the vast majority of shoplifters are everyday citizens who steal – not for financial need – but to relieve emotional and societal pressures and “for the rush of getting away with it,” according to the National Association of Shoplifting Prevention. In fact, drug addicts who shoplift say the high is as addictive as the drugs they use.

About one-fourth of shoplifters are teenagers, and many adults who continue to shoplift say they began when they were teens. The National Association of Shoplifting Prevention (NASP) works with communities and parents to combat the crime and has a number of programs for teenagers and adults to help them overcome the underlying issues that cause them to shoplift. If the issues aren’t resolved, the person is likely to continue shoplifting, the nonprofit group said. For more information, visit www.shopliftingprevention.org.

Shoplifting has become such a problem for communities and businesses, the NASP says, that one in 11 people in the United States shoplifts. Habitual shoplifters steal an average of 1.6 times a week, and most adults who shoplift say it’s hard to stop even after they get caught. The costs of shoplifting are passed on to the consumer through higher prices, and store owners often have to reduce staff as revenues are reduced.

Most adults and teens who shoplift don’t set out to do so. For nearly three-fourths of shoplifters, it’s an impulse decision. Many shoplifters buy some merchandise while they steal others. The vast majority of shoplifters do not commit other crimes, NASP research shows.

What can retail stores do to prevent their establishments from becoming victims? Beyond placing security cameras in strategic locations and using anti-theft tags on merchandise, here are 10 tips gathered from various law enforcement and security organizations:

1. Watch for customers who wear baggy clothing, coats, etc., or carry large bags, umbrellas, baby carriages or other items that could hide merchandise. Customers who linger and don’t make eye contact or seem nervous are also suspect. Sometimes just approaching them to ask if they need assistance is enough to scare them off.

2. Make potential shoplifters feel watched. Greet customers when they come in the door. Encourage employees to walk around, especially by the walls and tucked away locations. Elevate the cashier’s platform. Shoplifters like anonymity and avoid stores with attentive employees.

3. Post signs against shoplifting, and let shoplifters know they will be prosecuted. Because most shoplifters typically don’t commit other crimes, the idea of prosecution scares them.

4. Maintain a clean store with open displays and neatly arranged products to show potential shoplifters that salespeople are aware of what merchandise they have. Take visual inventory several times a day.

5. Keep expensive items locked in display cases behind strong glass so that the items must be shown by a salesperson.

6. Place popular, smaller items near the cash register. Small merchandise that is easy to conceal is a prime target. Make-up, jewelry and mobile accessories are particularly targeted.

7. Be particularly aware when the store is crowded or when a big group enters together. Be alert to distraction tactics that draw attention away while another member of the group shoplifts.

9. Use printed tags, never handwritten, and attach them to merchandise with strong plastic strings. Require receipts for merchandise return.

Store employees should take extreme care in approaching someone they have seen steal merchandise, according to PreventShoplifting.com. Some shoplifters can be dangerous, so the store should have a plan in place.

To avoid false arrest claims, it is essential that an employee see the shoplifter approach the merchandise and conceal or carry it away. The employee must not lose sight of the shoplifter until the person is out of the store.

Once the shoplifter is outside the store, preferably two or more employees should approach the alleged shoplifter and ask him or her politely to return to the store until law enforcement arrives.