Office construction off to slow start in 2015

Despite a 12 percent increase forecast by a consensus of market researchers, a slow start in early 2015 shows that construction growth in the office sector is far from a sure thing. 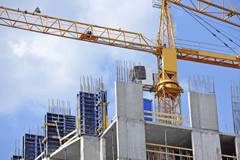 Individual 2015 forecasts for office construction ranged from a high of 23.5 percent by Dodge to a low of 7 percent by FMI.

Construction Market Data latest data shows a wide divergence from the forecast. In February 2015, private office building starts were down 69.7 percent year over year, and year to date, they were down 53.5 percent.

Government office buildings were up slightly in February, 4.5 percent over 2014, but year to date they were down 31.9 percent. Whether one of the coldest winters on record made an impact remains to be seen.

The nonresidential real estate sector has been a bright spot for the construction industry in recent years, somewhat offsetting the downturn in home construction. Based on performance, continued optimism seemed justified.

Only the coming months will reveal whether this decline in office starts is a trend or a temporary glitch. Other issues continue to contribute to uncertainty and flux, including labor, interest rates and rising costs.

Labor has been an issue in the industry as laid-off workers moved to other industries or quit working entirely during the recession years of 2007-2009, when 2.2 million construction jobs were trimmed.

A survey by Associated General Contractors reported that 83 percent of firms were having trouble finding both skilled workers and laborers. Project supervisors, engineers and estimators are also in short supply, with 61 percent of firms reporting a shortage of suitable candidates.

Since 2008, the prime rate has been a historical low of 3.25 percent, which is a major boon to companies seeking commercial loans. Banks use the prime rate to set their interest rates so both owners and construction firms have benefited from low-cost capital.

Indications of economic recovery usually mean an increase in the prime rate, so businesses are watching the Federal Reserve closely. So far in 2015, the rate is unchanged, but if it goes up, there will be a ripple effect as cost of funds rise.

In commercial mortgages, rates are fixed for only three to five years, so prime rate is always of interest. Lines of credit may adjust monthly.

Cost of construction materials has been volatile, affected by high transportation costs and increased demand. Prices of aluminum, cement and gypsum have been rising. Despite sinking diesel prices over the past six months, Rider Levett Bucknell (RLB) reported that first quarter 2015 construction costs rose at an annualized rate of 4.64 percent, while the annualized consumer cost index annualized fell 4.03 percent.

A noteworthy trend toward multi-use properties continues to impact the office construction sector. The emphasis on live-work-play developments has affected project design in a movement away from single-use buildings or parks.

In the movement away from sprawl development, central business districts in urban areas are being redeveloped with live-work-play in mind. The most desirable urban options locate residential units, retail, restaurants, gyms and recreation options near employment. This trend is now moving to suburban areas, where former single-use retail centers and office parks are transitioning to mixed-use districts.

Preferred Office Locations, a report by the Commercial Real Estate Development Association, cites Belmar, a 22-block area in the Denver suburb of Lakewood, and Ballston, outside Washington, D.C., as examples. These projects, called suburban vibrant centers, are fostering a sense of community and place desirable to potential residents, retailers and employers.