One in four parents don't plan to leave inheritance

Many a Millennial has likely cringed at their parent’s bumper sticker: “I’m spending my kids’ inheritance!” 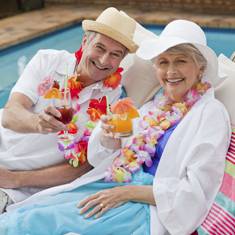 One in four American parents is doing exactly that, according to a new study. They plan to spend all of the money they have saved and let the next generation create its own wealth, the Future of Retirement research studies by HSBC has found.

Only 9 percent of American parents are at the other end of the spectrum – saving as much money as they can to leave it to their children.

Not surprisingly, the vast majority are in between. Two-thirds plan to spend some and save some for the kids.

American children bemoaning their fate might be envious of Indonesians. More than any other country in the world, Indonesian parents save as much as possible to give to the next generation – 28 percent of them – while only 16 percent of parents plan to spend it all.

More parents in Hong Kong, the U.K., Canada and Australia plan to spend all of their life earnings than in the United States, with only 5 percent of British parents believing it’s better to save their money for their children, according to the study of 16,000 working people over age 25 worldwide, including 1,000 Americans. The average worldwide was 21 percent who said they want to spend it all, 13 percent who want to save it all for the next generation, and 66 percent who want to spend some and save some.

American men, more than women, want to spend it all, leaving it up to their children to create their own wealth. The study found that 30 percent of American men compared to 17 percent of women are in favor of spending it all.

More women are in favor of spending some and saving some for the kids – 74 percent, compared to 61 percent of men.

Perhaps part of the reason that American parents are leery of leaving more of their money to their children is their lack of trust in their children’s maturity level to handle it.

In the 2015 U.S. Trust Insights on Wealth and Worth study of 640 high wealth individuals (those with $3 million or more), nearly half believe their children won’t have the maturity to handle the family wealth until they are over age 35. Nearly half of respondents who are members of the oldest Senior Generation believe their children won’t have the maturity needed until they are older than age 40.

The primary reasons for not telling their children how much money the family is worth are: