The whistleblower protections provided by the Sarbanes-Oxley Act (SOX) have been significantly expanded to include the employees of private contractors and subcontractors of public companies as well as the employees of the companies themselves, as a result of a recent U.S. Supreme Court decision. 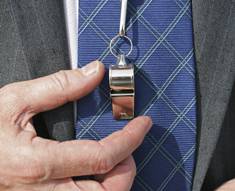 In the case of Lawson v. FMR (March 4, 2014), the court held (6-3) that accountants, auditors, attorneys and other employees of contractors or subcontractors that work for a public company are protected from retaliation for reporting fraudulent activity.

The decision stated: “No (public) company – or any contractor or subcontractor of such company – may discharge, demote, suspend, threaten, harass or discriminate against an employee in the terms and conditions of employment because of (whistleblowing or other protected activity).”

Unless private companies are also protected, the decision said, “legions of accountants and lawyers would be denied section 1514A’s protections.”

In her opinion to the court, Justice Ruth Ginsberg said Congress was “aiming to encourage whistleblowing by contractor employees who suspect fraud involving public companies with whom they work,” and to have found otherwise in this case would have put a “huge hole” in the law.

She also said the court’s interpretation of the law “avoids insulating the entire mutual fund industry” – whose companies typically have few employees and contract with investment advisors to conduct business – from the whistleblowing protections of the law.

The Sarbanes-Oxley law was enacted in 2002 in response to a number of corporate scandals, including Enron Corp., whose fraudulent accounting procedures disguised billions in losses and debt. The Enron collapse also brought down the Arthur Andersen accounting firm.

After more than a decade in existence, the SOX legislation appears to be paying off as a detriment to fraud. In a 2013 study by the Protiviti consulting firm, 80 percent of financial officers responding said they have seen improvement in internal controls over financial reporting.

The controversial legislation was seen as potentially bringing high costs of compliance to American corporations, particularly smaller companies. While one-third of companies in the Protiviti study reported increased costs, a majority of executives reported that SOX costs “remain at a manageable level.”

A study by Howard University also found that while the initial costs of SOX requirements were substantial – and disproportionately on smaller companies – costs have steadily fallen over time for all companies.

SOX-related litigation spiked initially after enactment of the law but soon subsided to the levels they were before the legislation, the study found.