Cell phones are one of the most used means of communication in manufacturing plants across the country, but they are falling short for day-to-day operations, according to a new study. 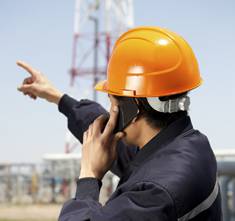 One-third of the small, medium and large manufacturers surveyed in 32 states by Motorola use cell phones as their primary means of plant communication. They are used so much, in part, because many workers bring their own devices to work.

Another 31 percent use two-way radios and the rest are split between email and overhead paging systems. Landline phones are the least used, according to the 2014 Study: Top Trends in Plant Communications.

Reasons respondents said cell phones can be problematic include:

The most important consideration for plant communication, the manufacturers said, was having a reliable device with a long battery life.

Having a rugged device that won’t be broken if it is dropped is also important. Each communication failure costs manufacturers 80 minutes in production time and over 2.5 hours of support time.

Nearly half of those surveyed said an updated communication system would improve their company’s efficiency and worker safety.