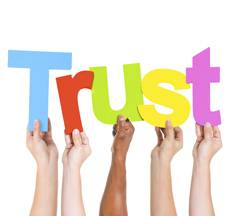 Everyone knows that great products or services, customer service and attractive prices are important to mention in your marketing campaign. But what about leveraging your status as a family-owned enterprise?

For the first time in 2014, the Edelman Trust Barometer asked respondents about business structure and trust. Family ownership came out on top.

Public relations firm Edelman has conducted annual trust surveys since 2001 to gauge public sentiments regarding the trustworthiness of business and government. In 2014, 33,000 people were surveyed worldwide.

The survey also asked about specific company attributes. Family-owned businesses were regarded as more entrepreneurial and scored higher in innovation and responsiveness to customers. Weak areas were a relative lack of transparency and philanthropy.

This trust profile provides information that can be used a little deeper than merely mentioning family ownership in advertising materials or logos. That’s a good start and immediately creates a favorable impression.

Perhaps it is readily apparent that family well-being is directly tied to business performance, in contrast to the often faceless image of large public corporations.

Multi-generational ownership also conveys stability and employee longevity, a major advantage if the business is small. Customers are leery of fly-by-night enterprises that might disappear with their money or might not honor maintenance contracts or warranties.

This very stability may have created a perception that a business rooted in the past means a lack of innovation. The Edelman survey points to the opposite, perhaps a message that can be used more fully.

The entrepreneurial spirit that created the business initially can be promoted, as can innovations developed over long-time service to customers.

The perception of responsiveness is one of the most valuable, especially in light of the reputation of big corporation for lack of interest in individuals as well as impersonal customer service systems. Customers want to be heard, especially if there is a problem with their purchase.

With the proven link between executive visibility and trust, family enterprises can use the involvement of owners to their advantage. Edelman suggests that executives communicate clearly, address any bad news head on and engage with employees on a regular basis.

This will help mitigate any perceived lack of transparency as found in the survey. Edelman recommended engagement and integrity as two key areas in building or maintaining trust.

Another area to focus on in marketing efforts is the philanthropic activity your company engages in. Perhaps small businesses can’t give on the level of large corporations, but they can cultivate close community relationships.

Being closely tied to other aspects of community life in addition to conducting business is a definite plus for family owned companies. Make sure your existing and potential customers know how much you give back. – Elizabeth Penney, M.B.A.