Job rotation and mandatory vacations, rewards for whistleblowers and surprise audits are the three least used anti-fraud controls by organizations that have been victims of employee theft. Less than one-third of organizations employ these methods to deter fraud. 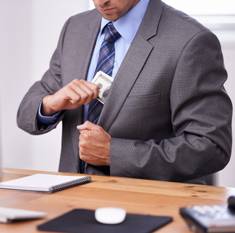 Yet, when any one of these three fraud deterrents is present, the crime is detected far faster than with any other anti-fraud control, according to the most recent biannual report of the Association of Certified Fraud Examiners.

Rotating jobs and requiring employees to take mandatory vacations so other employees can temporarily fill the position were required at only 16 percent of the nearly 1,400 businesses that suffered employee theft in the fraud examiners latest report.

For those businesses that did not require job rotation or mandatory vacations, the average amount of time it took to detect the fraud was 24 months. For those that did, the detection time was only 9 months, a 62.5 percent reduction in the time – and dollars – that the thief had the opportunity to steal.

Employee tips are by far the most common way fraud is discovered. More than half the fraud cases in the study were detected after an employee tip.

When whistleblowers know they will receive a reward for a tip, the duration of the fraudulent activity is reduced from an average of 22 months to 9 months, a 59 percent reduction in the time the dishonest employee has to perpetrate the crime.

Even though tips are the most prevalent way fraud comes to the surface, only half of the victim organizations in the fraud examiners’ study had an employee hotline for anonymously receiving tips.

External audit was the anti-fraud measure most often conducted by business victims in the study. Four of five organizations conducted an external audit.

But external audits proved to be the least effective method of actually detecting fraud, with only 3 percent of cases in the fraud study detected in an external audit of financial statements. That could be because the perpetrator anticipated the regular audit and was ready for it.

If, however, a surprise audit was conducted, the fraud was detected twice as quickly, with the discovery time dropping from 24 months to 10 months – a reduction of 58 percent. For regular external audits, the discovery time was 17 months.

The following shows how much the duration of fraud is reduced if the anti-fraud control is in place, according to the fraud examiners study: