Tips hotline: Can you afford not to have one?

Tips from employees, customers and vendors are by far and away the most common way employee fraud is detected. 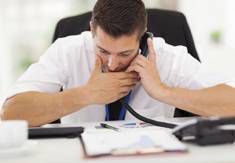 Yet, in a recent study, only slightly more than half of all organizations that were victims of fraud had a tips hotline – and only 18 percent of small businesses had one.

The Association of Certified Fraud Examiners consistently has reported that tips by employees and others are by far the most effective way of detecting fraud.

In its 2014 report, the ACFE found that 42.2 percent of fraud discoveries came from tips. Following far behind were management reviews (16 percent) and internal audit (14.1 percent). The next most common way fraud was discovered was “by accident,” (6.8 percent).

Previous reports have shown that more than half of the tips come from employees, about one in five from customers, one in 10 from vendors, and a handful from shareholders and competitors. About one in 10 also come from anonymous sources.

Informants provide information or tips for a variety of reasons. It might be a feeling of moral responsibility, a grudge or even a chance to play detective. Whatever the reason, these tips are powerful tools in the fight against fraud.

The presence of a hotline also resulted in fraud being discovered 50 percent earlier, and in a 41 percent lower monetary loss for the company, the study found. In companies without hotlines, far more frauds were found by accident than in companies with hotlines.

Vendors, shareholders and customers, as well as current and former employees, need to be provided with a process to confidentially report suspected wrongdoing.

While an open-door policy may be effective in some circumstances, many employees are not comfortable revealing their identity because of fear of retaliation or ridicule if their concern proves to be without merit.

One-way communication, such as anonymous letters or phone messages, frequently leaves out critical information necessary to investigate the allegation. The most effective communication tool for receiving tips is the hotline.

Some organizations offer internal hotlines, but this solution comes with significant problems. Chief among them are operational issues such as inconsistent handling of calls, staff training and off-hours voice-mail reporting. Fear of recognition may keep employees from using an internal system.

The best choice for most companies is to contract with an external hotline provider. These organizations provide trained interviewers and the technology to efficiently operate the hotline. Their phones are staffed 24/7, 365 days a year. Around-the-clock availability is critical, since more than half of all calls are received outside of business hours.

Two-way communication is essential to validating the tip and converting it to an actionable report. There is no substitute for human interaction when dealing with an anonymous caller because there may never be another chance to gather information.

Tipsters typically are emotionally charged, causing them to leave out important details. A skilled interviewer will probe to ensure that pertinent information is gathered in the initial call. Red flags such as slurred speech or an inability to answer logical questions or clarify information will alert the interviewer to the possibility of a phony tip.

Because of the variety of issues being reported, a distribution and follow-up matrix should be developed to ensure that no tips are overlooked. Dual distribution is a valuable control feature. If a single individual is responsible for handling the reports, that person, if somehow involved, could prevent an investigation.

Allegations of financial irregularities present a complicated situation for publicly traded companies. Sarbanes-Oxley requires the audit committee of the board of directors to develop a method for the treatment of tips.

Tips regarding financial irregularities should be sent directly to the audit committee. The hotline provider should provide procedures that satisfy the treatment and retention requirements of Sarbanes-Oxley.

Once the tip is received, it must be investigated by the right people within the organization. Generally, the action recipient is charged with developing procedures to investigate issues reported to them.

Organizations without internal audit departments or a formal board of directors often reach outside the organization for assistance. A designated officer of the company may serve as the action recipient with the outside auditor acting as follow-up recipient.

Many organizations are developing relationships with accounting firms that specialize in forensic accounting, thus giving them an independent source to manage investigations.

Certain high-risk tips must be acted on immediately. Depending on the nature of the business or the danger to employees, certain matters may not wait until Monday.

Regular communication with employees, vendors and others about the organization’s commitment to ethical behavior and what is not acceptable will encourage them to bring this type of behavior to light. Investigating incidents in a timely manner and taking corrective action will demonstrate the value of tips.