Twice as many women are embezzlers as men

Why do longtime, trusted employees embezzle from their employers? 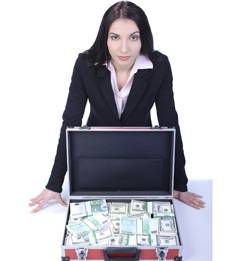 Has the economy broken them down? Are they harboring anger toward management?

Those two scenarios might be the case in some situations, but the vast majority of embezzlement cases take place for two primary reasons, according to more than 2,000 major embezzlement cases studied by Marquet International, Ltd., over the past five years:

1. They want to live a more lavish lifestyle than they can afford. (56 percent)

2. They have a gambling addiction. (32 percent)

In fact, “true need” was the cause less than 2 percent of the time, the study found, about the same amount as substance abuse. The only other reason that was notable was the 5 percent of embezzlers who stole to start or support their own business.

Almost all embezzlers work alone, and three out of four hold a position in finance, bookkeeping or accounting, according to the study. The most common method of embezzlement involves the issuance of forged or unauthorized company checks. Next is the theft of cash receipts. Unauthorized electronic transfers have grown to become the third most common method.

Most embezzlers are trusted employees who have worked for the organization for years. Only 4 percent in the study had a criminal history. Embezzlements most often begin when the perpetrators are in their early 40s.

Women outnumbered men by a considerable amount – two-thirds of embezzlers are women.

In fact, the second biggest case in Marquet’s last study was committed by Rita Crundwell, who was convicted of stealing nearly $54 million over a period of 24 years from the small town of Dixon, Ill. The embezzlement was discovered when she was on her annual four-month vacation attending horse shows (she used the stolen funds to support her quarter horse business) and a temporary employee came across a suspicious account.

A woman was also at the root of the embezzlement with the longest duration – 27 years. Sharon Broadway of Toledo, Ohio, embezzled $2.5 million from the United Catholic Credit Union, where she had been employed as “manager, secretary, board member and sole employee” – and there were no business controls.

And the oldest major embezzler reported was also a woman, 91-year-old Mary Ella Hixon, who stole $202,000 from the city of River Falls, Ala., where she had served as mayor.

Although fewer men embezzle, when they do, they steal more than twice as much as women do, the study found.

The biggest embezzler in the most recent Marquet study – Russell Wasendorf, Sr., of Cedar Falls, Iowa, – stole $215 million over 20 years from the clients of Peregrine Financial Group. He was discovered after a botched suicide attempt in which he admitted the embezzlements in a suicide note.

The study found that many cases of embezzlement began during boom years rather than during a period when the economy wasn’t good, and they went undetected for years. More fraud tends to be discovered during a struggling economy, when financial statements are more carefully scrutinized.

In addition to the financial services industry, government agencies and municipalities and nonprofit organizations – which all of the large cases described earlier fall into – have the highest frequency of fraud. Health care, manufacturing and real estate also have higher frequencies of embezzlement than other industries.

California has experienced the greatest number of embezzlement cases in the past five years, followed by Michigan, Pennsylvania, New York and Texas.

Because of the high number of cases involving gambling addictions, many of the thefts take place in states where there are casinos, Native American gaming facilities, racetrack betting or lotteries. Michigan had more embezzlements based on gambling than any other state.

The average prison sentence for those convicted of embezzlement is four years, but prison time can vary depending on the amount stolen, the length of time the fraud was conducted and the jurisdiction where the crime took place. Some receive no jail time, and others receive very strong penalties.

For instance, in the cases described above, Russell Wasendorf was sentenced to 50 years in prison for stealing $215 million, and Rita Crundwell received 19.5 years for embezzling $54 million.

A Colorado bookkeeper, Long Khong, was given no prison time for stealing $815,000 over seven years’ time, but library director Mari Jenkins was sentenced from three to 30 years for stealing $269,000 from the library in West Virginia.

Mary Ella Hixon, the 91-year-old who stole $202,000, was sentenced to 10 years in prison, but her sentence was suspended in favor of probation because of her age.