Use of robotics in industry expected to double

The use of robotics in industry is expected to more than double during the next decade, as robots become cheaper, more sophisticated and more energy efficient, according to new research by Boston Consulting Group. 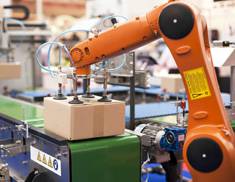 Worldwide spending by industry on robotics is expected to approach $25 billion by 2025, up from $11 billion in 2015, as robots are purchased not only to augment some manufacturing functions but to replace some labor.

Overall spending on robotics in a decade is estimated to be approximately $67 billion – including military, commercial and personal markets – as many countries gear up for an expected labor shortage in the decades ahead.

Not only are robots becoming more flexible, sophisticated and capable, as additional arms are added for multi-tasking, they can work more efficiently in some capacities than humans because they don’t need heat, air conditioning, lighting, food or bathroom breaks, the Boston Consulting report said.

To date, most jobs lost to automation have been blue-collar jobs, but many more white-collar jobs are expected to be at risk as robotic innovations increase. What the impact of increased robotics will be on the workforce is a subject of debate.

A recent study by Pew Research found that about half of the nearly 2,000 experts interviewed believe increased robotics will lead to the displacement of a significant number of both blue collar and white collar jobs, leading to vast increases in income inequality.

The other half believe that technology will not displace more jobs than it creates, and that while robotics will take over many jobs currently done by humans, that human ingenuity will create new jobs and industries.

Both groups believe that the educational system is not adequately preparing students for the work of the future.

According to Purdue University research, the people who will be at greatest disadvantage as more robots take over human jobs are:

The biggest advangtage humans can bring to the job in the future, says Purdue researchers, is their ability to respond to other humans. Which is why many jobs in the future will require interpersonal skills such as empathy and caring.

To decide if your company could benefit from robots, Boston Consulting recommended identifying the following:

Following behind the industrial sector, the use of robotics is also growing rapidly in the military and commercial fields – particularly in medicine, agriculture and construction. Military use is expected to more than double in a decade to $16.5 billion in sales, and commercial use is estimated to nearly triple, from $5.9 billion in 2015 to $17 billion in 2025.

The personal market for robotics – which includes cleaning and household duties, caregiving, security, education and entertainment – is the smallest of the markets today, with $2.5 billion in sales. But it is anticipated to be the fast-growing market over the next decades, with the market expected to nearly quadruple to $9 billion.

Not surprisingly, robots are being used most in the manufacturing plants of Asia, with South Korea and Japan having more robots per 10,000 workers than any other countries. Demand is growing fastest in China.

The automotive industry currently uses more robots than any other industry – 40 percent of all industrial robots – with Japan, France, Germany, the United States and Italy leading the way, the Boston Consulting report said.

Amazon.com in 2012 purchased Kiva Systems, a manufacturer of warehouse robots, to improve the efficiency of its orders in its warehouses. Amazon said it expects to increase the number of robots in its warehouses from 1,400 to 10,000 by year-end.