Manufacturing has a perception problem.

And it could be costly in the future. 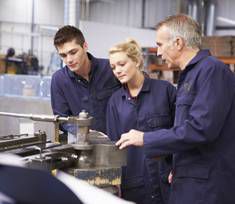 As Baby Boomers retire by the bucketful, a shortfall of 2 million manufacturing workers is predicted in the next decade. And most of the kids aren’t interested.

In a recent poll, 52 percent of teenagers said they have no interest at all in a career in manufacturing. And 61 percent perceived manufacturing as a “dirty, dangerous place that requires little thinking or skill from its workers and offers minimal opportunity for personal growth or career advancement,” according to a recent Foundation of Fabricators & Manufacturers Association study.

Not only are the youth of today not interested in manufacturing jobs, they aren’t studying the right coursework to qualify for the technologically advanced positions required by today’s industrial employers.

There is a serious lack of STEM education (science, technology, engineering and math), coupled with a reduction in technical education programs offered in high schools.

Unless more skilled workers come into the work force, the projected shortage will have a heavy financial impact, most of the 450 manufacturers surveyed by the Manufacturing Institute said.

Four of five executives responding believe the skills gap will impact their ability to meet customer demand, as well as to increase their productivity. Customer service and research and development are also expected to suffer.

Today’s manufacturing workers must be knowledgeable of how to work with “smart” machines, including robotics, 3-D modeling and other advanced technologies. The areas expected to be hardest hit by the skills shortage are machinists, operators and technicians, as well as highly specialized employees such as scientists and design engineers.

Most manufacturers in the study said they were willing to pay skilled employees more than market prices in areas of particular need. The average manufacturing worker already earns more than workers in all other industries – an average of $77,506, according to the study.

Expanding the future manufacturing work force will take considerable work and planning, the study concluded. A number of initiatives are under way by the Manufacturing Institute, the National Association of Manufacturers and other groups. The groups are optimistic but realize they have a huge challenge before them.

Strategies aimed at closing the skills gap include: